Data Pushes Investors to Focus on Women in Leadership

Data Pushes Investors to Focus on Women in Leadership 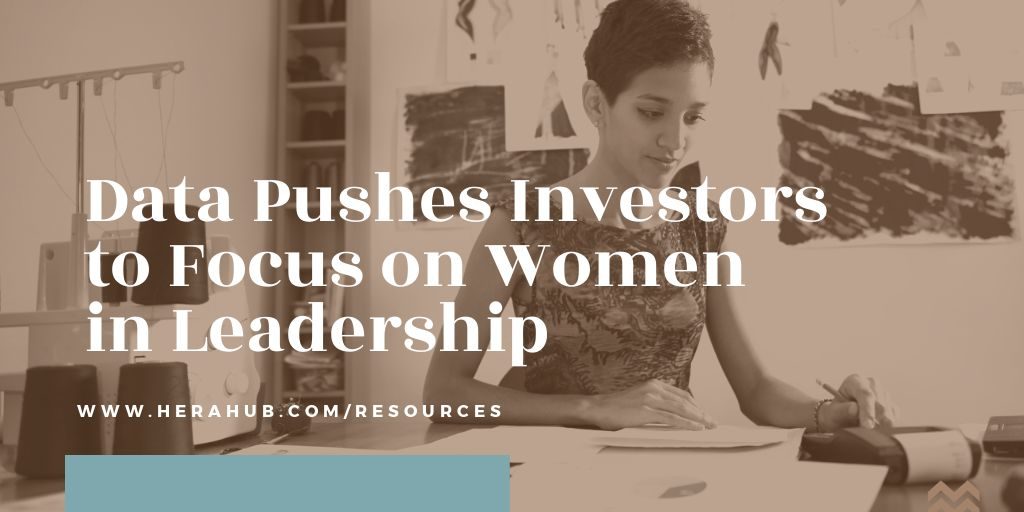 October is National Women’s Small Business Month. Jenny Abramson, CEO of Rethink Impact shares how data is pushing leaders and investors to consider the market opportunity of women in leadership.

As Founder & Managing Partner of the largest venture capital firm in the country dedicated to investing in female leaders using tech to tackle our greatest challenges (Forbes), we spend a lot of time thinking about the current state of female-led companies. When I was a tech CEO, I saw firsthand how few of my female peers were represented (in funding rounds, on given panels, etc.), so I decided to look into the data.

Twenty years ago, when my own mother was running a VC fund that invested in women, female entrepreneurs got 2.5% of VC dollars (Babson). What shocked me was that 20+ years later, female founders are getting only 2.3% (PitchBook).

What Drives the Inequity of Women in Leadership?

Given the fact that startups founded and cofounded by women actually outperform their male counterparts – studies show they earn 10% more cumulative revenue in a five-year period (VentureBeat).  It may be surprising to hear that they still get so few venture capital dollars. While I don’t believe VCs are outright avoiding investing in female entrepreneurs, there may be some unconscious biases at play that drive this inequity.

When it comes to investing in early-stage companies, there often isn’t a lot of data/financial results available. Many investors, therefore, end up using pattern matching to evaluate companies and often look to invest in companies that “match” their past winners. Given that the vast majority of VC dollars are going all-male teams (PitchBook) the cycle continues.

My partner Heidi Patel and I make up the ~8% of partners at top venture capital firms who are women (Crunchbase), and that the stats get even worse in terms of non-white VC investors (HBR). Combine that with the fact that female venture partners invest in 2x as many female entrepreneurs than male venture partners (IFC), it’s no surprise that this trend continues.

Have we reached a turning point in history?

The good news is that I believe we are at a moment of change for the startup and venture industry. First, and arguably most powerfully, the data is pushing leaders and investors to consider the market opportunity: companies that have more inclusive teams, such as women in leadership positions, get better performance from individuals, teams, and entire organizations, and are more likely to produce innovative products and deliver them faster to the market than non-diverse groups (Korn Ferry). And no one can argue that it is a pipeline issue, as women launch 40% of tech companies (American Express).

The data is pushing leaders and investors to consider the market opportunity of companies that have more inclusive teams, such as women in leadership positions.., Click To Tweet

Second, social media and the movements that have been enabled by it are taking off in ways they haven’t before. The #metoo movement, All Raise, TimesUp, and others have had a big impact on exposing the flaws in the VC community and creating opportunities.

Finally, beyond the leaders in funds, what really matters is who is backing the funds. Two-thirds of all US wealth will be controlled by women in 2030 (Prudential) and women care about where their investment dollars are going (The Economist). While I realize the age-old saying “history repeats itself” exists for a reason, I am confident we may finally be starting to break that cycle once and for all.

Jenny Abramson is the Founder & Managing Partner of Rethink Impact, the largest venture capital firm in the country dedicated to investing in women using tech to solve the world’s greatest challenges. She sits on the boards of Ellevest, FutureFuel.io, Sempre Health and as a board observer for Neurotrack and Werk. Previously, Jenny served as CEO of LiveSafe, a tech security company focused on preventing school shootings and sexual assaults. She also held leadership roles at The Washington Post, Personal (a data tech company), The Boston Consulting Group, D.C. Public Schools, and Teach for America.

Jenny is a board member of the NFL Players, Inc., DC Prep, and is board chair of Georgetown Day School. She is also an active member of All Raise, co-leading their data efforts. Finally, she is an Advisory Board member of the Camden Partners Nexus Fund (an early-stage health-focused VC fund).

Jenny has been covered in Forbes, on CNN, in The New York Times, and in The Washington Post, interviewed on Squawk Box, featured at the Code Conference, at the United Nations, at the G7, and on Capitol Hill, and was named Top 40 Under 40, a DC Power Women in Tech and a DC Tech Titan. She received bachelor’s and master’s degrees with honors from Stanford University, an MBA with honors and the Dean’s Award from Harvard Business School (where she also served on the Investment Committee for Shareholder Responsibility for Harvard University) and was a Fulbright Scholar at The London School of Economics. Follower Jenny on Twitter @abramsonjenny