“Where are you from?”

“Well, it depends…how far back do you want me to go? 8 yrs, 10 yrs, 15 yrs, 40…ancestral lineage? It’s complicated.” That’s the usual question and answer dialogue I have with people, usually after “your name is really interesting, what is it?”  I too sometimes have fun with this question, basing my answer on my mood and the sincerity of the one who is asking. Sometimes, I just say I’m from Chicago, since I lived a large portion of my younger life there. Other times, I’ll get a little snarky and say “a galaxy far, far away.”  And then, there are times I try to answer back with another question to probe how to shorten the story…. but all in all, I know what people want to know. Some are really curious and want to know my story. While others aren’t as innocent and just want to hear that I’m not from around here.  In truth, I’m a blend of worlds and cultures, both here and there, but its perfect and has shaped me, who I married, and how I raise my kids.

So, where am I really from? I was born in Homs, Syria in 1977. A city that has now been almost completely destroyed by the war that has lasted almost 8 yrs now and looks like Europe out of WW2 (more on that later).  My parents at the time were actually living in Amman, Jordan and I do have distinct memories as a child before the age of 4 in both Syria and Jordan…fading images of events that were imprinted on my brain. By the time I was around 4 yrs old, we emigrated to the US and that was the last time my father ever saw the country he was born in, the country he was raised in.  By early 1980/1981 it was no longer safe for men to be in Syria, especially if you happen to be born from a certain city, the city my father was born in, Hama. The regime and dictator of the time took on a scorch and burn policy to the city of Hama, similar to what other dictators of that region had done to their populations—Saddam Hussein, Muammar Qaddafi, and almost exactly like the son of the dictator has been doing since the start of this war, 8 yrs ago.  Although we lived in Jordan, my father had had enough and got accepted to come to the US to do his Ph.D. So, he took it and bid farewell to the chaos, heartbreak and ruthless countries…but also said good bye to his brothers, sisters, parents, and extended family—and never went back. Its something I always asked my dad before the war in Syria started, “don’t you ever want to go back? Aren’t you curious to see what has happened over the past 40 yrs? Don’t you want to see your old house? The mountains where you used to go? The beaches on the Mediterranean? Walk through the old souk? “I really wanted to take my father back and show him how much we fell in love with Syria and appreciated it. But he would say, “No, I’ve closed that chapter on my life. I cannot go back to a country where the government has destroyed, murdered, pillaged and raped my people.” You see, the year that we fled to the US was when almost 40,000 people of the city of Hama were killed— door to door executions, imprisonment, torture of men, women and children.  The government especially targeted the men. Men were hauled off to torture camps, if they weren’t killed on the spot and buried in mass graves.  Horror stories are told of that time and you could feel it in the air of the city.  There was literally a whole generation of men missing when you walked around the streets of Hama. You see, although my father never went back, my siblings and I did with my mother.  My mother would take us to Syria in the summer to reconnect, spend time with grandparents, aunts, uncles, cousins, extended family. She wanted us to stay connected to our roots, our culture, and our heritage. Since we had family all over the country, we also had the chance to explore the entire country from its major cities to the mountains, beaches and deserts.

By 1981 we landed in Chicago, in a tiny apartment in the SW side of Chicago while my father got his Ph.D. in computer science. There were 3 of us kids at that time, learning a new language, going to school, growing up and blending an American childhood experience of the 80’s with Syrian culture.  That merely meant spending our days on our bikes roaming the streets, playing till dark, breakdancing and all the fun experiences of the 80’s, while spending weekends going to Arabic school to learn it as a second language (since English became our native tongue quickly).  We also ended up spending many summers back in Syria while my father pursued his career as a professor at UIC.  Like many others, those years were some of the fondest years and memories I had….  Then, my life took on another sudden turn right when I was starting high school.  My father accepted a tenured position and we moved to a small town called Statesboro, GA about an hour’s drive from Savannah.  We moved from a hustling, diverse city to the deep south! And that’s when these questions really started…

below: city of Homs, where I was born, before the war and now: 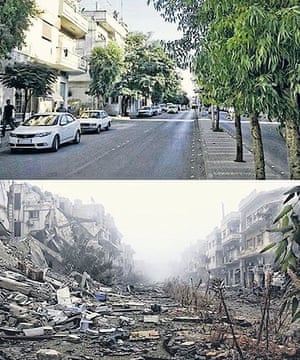